An Effective 3 Point Crime Plan For Trinidad and Tobago 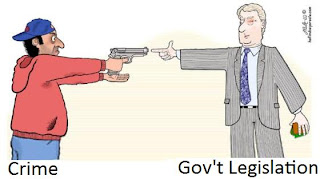 The law in its current form ensures only non-law abiding citizens and on duty police will have firearms. This therefore emboldens criminals because they know that law-abiding citizens are unarmed and powerless to defend themselves. Essentially making the majority of Trinbagonians potential victims.

The Trinidad and Tobago Police Service - An inefficient government agency should not have monopoly over your individual personal safety and security. Government has monopoly over water, the issue of drivers's permits, passports, ID cards, customs etc etc. How have these services worked out?

If citizens want to figure out what works look at what the persons with the most power, money and autonomy do to protect and safeguard themselves. They enlist the services of armed guards to protect them or they pay the requisite bribe to get a firearm license.

2. Legalise the use of illegal drugs.

This will essentially stop the waste of police resources on the policing of illegal drugs. Drugs like marijuana therefore should be immediately legalised. Currently the Trinidad and Tobago Prison Service can't even keep drugs out of prisons, how will the TTPS keep drugs out of an entire island with open boarders. Our current policy was literally doomed to fail from the start. This approach would also allow the Trinidad and Tobago Police Service to assign more officers to patrol the streets and increase detection and conviction rates of more serious crimes.

This approach would also reduce drug prices for which huge premiums are paid on the black market, thereby making the industry less attractive to drug pushers.

This change in policy does not facilitate lawlessness but rather allows individuals to incur the consequences of their actions i.e. drug use leads to destitution. After all a million laws could be written but at the end of the day morality cannot be legislated.

Afford the public greater transparency over the judicial process. What motivation do police officials have to track down criminals when the majority of suspects go free? What motivation do officers have when they receive compensation whether they perform or not? Trinidad and Tobago does not just have a crime problem since police officers can't be everywhere a crime occurs it really has a crime prosecution and conviction problem.
Posted by TrinbagoViews.com