Everyone agrees the shortage of foreign exchange is bad for business. It limits the ability of the business community to purchase imports which are in turn offered for sale locally.

While the Central Bank of T&T issues regular press releases of how much $US it has pumped into the system; individuals not connected politically or to the commercial banks don't have access to these injections.

Its obvious, that given the severe declines in energy production and consequent declines in exports ($US earnings) there will be increasing scarcity of US dollars locally. This, coupled with the fact that the T&T government continues to flood the economy with newly minted $TT to fund social programmes means the $TT is losing value rapidly.

The politically connected and the banking class are well aware of this and are getting their financial houses in order by ensuring they dump $TT as much as they can in favour of $US at the underpriced official exchange rate of 6.33.

As a T&T citizen living in T&T you would be prudent to do the same. Unfortunately, if you are not connected to the privileged authorized dealers, anointed to get $US first by the CBTT tough luck!

In the first four months of 2015, CBTT provided just over one-third of the total foreign exchange supply to the market. The majority of foreign exchange inflows came from conversions by energy sector companies. According to the CBTT:

"Sectors that received the significant portions of foreign exchange during January-April 2015 were the Retail and Distribution (35 per cent), Credit Card (18 per cent), Manufacturing (12 percent) and Automobiles (7.5 percent)." 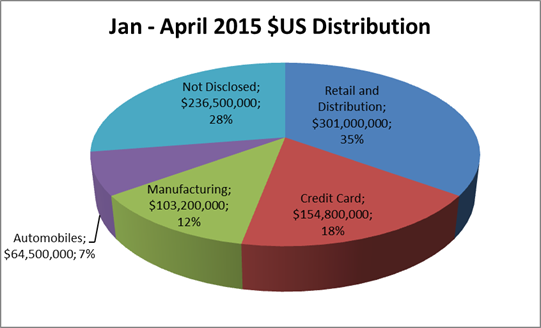 Conveniently the CBTT did not disclose where the remaining 28% or $US237 million went. It is highly likely these funds were syphoned away by the authorized dealers to foreign currency investments or offshore holding accounts. Although nothing is wrong with persons deciding to move their money into foreign currencies, everyone, not just a privileged few, should be granted this advantage at the expense of every other T&T citizen.

Hence, the average Trinbagonian is severely disadvantaged. Even if he senses the continued decline of the value of the $TT he can do little to preserve his savings or his standard of living. He is essentially trapped in the $TT system that perpetually erodes the purchasing power of his earnings and his savings.

How the T&T Central Bank Expands The Money Supply and Devalues The $TT
Posted by TrinbagoViews.com